Play Cat Wilde and the Pyramids of Dead for Big Rewards 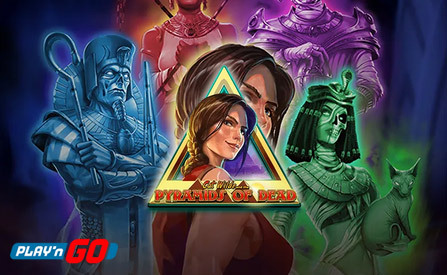 In terms of features and statistics, very little has changed in this version, but a festive Jackpot round has been added. So, let's go to this website and see what sets this edition apart from previous installments in the series. We are immediately transported to an ancient Egyptian landscape where we see the reels set against a backdrop of stone pillars and statues. The symbols on the reels include the adventurer Cat Wilde herself, as well as Pharaohs.

Welcome to Cat Wilde and the Pyramids of Dead, an action-packed video slot from Play'n GO that offers you the chance to win big! This slot has 5 reels, 3 rows, and 10 paylines, and you can bet between $0.01 and $100. This medium volatile game is packed with an RTP of 96.20% and features several bonus features such as wilds, scatters, extra spins, and jackpot round.

Explore and Take Your Treasures

The slot is a great opportunity for developers to experiment with new ideas and bring their unique vision to the Book of Dead series!

Head of Games at Play’n GO, Charlotte Miliziano commented: “IP titles as respected as the Dead series and characters like Rich Wilde and Cat Wilde are truly powerful. But with great power comes great responsibility, and opportunity too. It’s an opportunity to explore new avenues for these characters to evolve and innovate features to keep players coming back for more content.”

Sweden-based Play'n GO is one of the most popular online game companies in the iGaming industry, with 319 titles attached to their name. The company operates as an independent brand and is committed to building high-quality games. In 2019, they won an award for Mobile Supplier of the Year. The main reason for its success is that the developers put a lot of effort into creating unique and quality games. It has been accepted in around 15 regulated markets in Europe and also has a large market presence in various countries around the globe. Consequently, the brand is rated very highly by both players and critics alike.